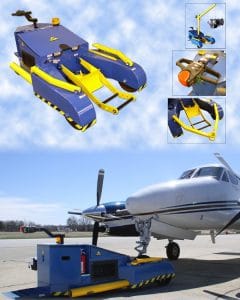 Mentor, Ohio, May 14, 2009 – Air Technical Industries announces the launch of the Scorpion Aircraft Tug, a first-of-its-kind tug that includes a built in crane lift and auxiliary power unit (APU). The Scorpion enables fixed base operator (FBO) aircraft mechanics to move and more accurately position aircraft weighing up to 15,000 pounds.

A fixed base operator (FBO) is a service center based at a private or municipal airport. Traditionally, FBO aircraft mechanics require multiple pieces of equipment in order to service small planes: an auxiliary power unit to start the craft, a tug tractor to move it, a crane to remove the engine for service and to load and unload cargo, and a tow truck or other utility vehicle with a winch to retrieve stranded aircraft.

By combining all of the above functionality into one compact, battery-operated unit, the Scorpion Aircraft Tug offers potentially significant cost savings over owning, maintaining, and storing four separate pieces of equipment. Because it is battery operated, it also eliminates aircraft tug gas or diesel fuel costs and exhaust. An overnight charge is sufficient for typical daily operations.

Currently, FBO mechanics need to use larger gas- or diesel-powered aircraft tug tractors in order to move a small plane (up to 15,000 pounds). They must connect the aircraft to the tractor via a tow assembly that is 15 to 20 feet long, making it cumbersome to maneuver.

The Scorpion Aircraft Tug is smaller, quieter, and more maneuverable than a traditional tug tractor, offering the operator the choice of walking behind or standing on its battery powered frame. It has hydraulic lifting arms that physically raise the front wheel of the aircraft off the ground, enabling precise positioning of the aircraft. Raising the front wheel also allows the operator to lower the tail of high-tail aircraft to clear low hangar doors. The drive handle pivots 90� for a zero turning radius and it offers variable speed control for precise acceleration and deceleration between 0 and 4 miles per hour.

The Scorpion’s built-in crane folds out of the tug’s base and offers a 7-foot telescopic boom lift with a lift-arm capacity of up to 1,000 pounds. It was designed both for loading and unloading cargo, as well as to help aircraft mechanics safely and efficiently move aircraft engines.

In order to start aircraft for testing and for takeoff, the Scorpion offers a built-in auxiliary power unit (APU) with powerful batteries that will kick-start most general aviation aircraft in the coldest weather. To round out its feature set, the Scorpion also offers an amber running light, headlights for safe nighttime operations, and an on board fire extinguisher.